skip to main | skip to sidebar

My writing on the blog had taken a back seat while Sam recovered from his Total Hip Replacement. I also decided to try my hand at writing some children's books and am hoping to find an agent to help me make that dream a reality, and of course, I have jumped into yet another job so I can travel with Sam and begin the process of helping Sam to live independently. Life is crazy...but life is great.

Sam's total hip replacement was an answer to our prayers. He is 100% mobile, no longer requiring the walker or confinement of the wheel chair. I can't even put into words how my heart feels when I see him race through the house or walk up and down the stairs. I often tear up when a Facebook memory comes up and he is in his body brace or wheelchair and I thank God, Sam's skilled surgeon Dr. Clohisy, and Ozaukee Therapy for where we are today. Never ever take for granted the gift of independent mobility. Each day I wake up and I thank God for allowing me but especially Sam to walk.

The video posted on Facebook (link here) right before Sam's surgery absolutely breaks my heart.  The amount of pain he was in and how crooked his posture was is just heart breaking. To see him now...walking without pain, easily and not holding his breath, smiling and laughing does all of our hearts good!

Sam is happily doing chores around the house again, getting the mail, taking out the garbage and recycling container, laundry, dishes... Sam has returned to work at J & H Heating where he puts together installation kits, sorts parts, takes care of the garbage and recyclables from the office and does contract work for a local hardware distributor.

I have always wanted all of my children to experience and enjoy volunteering. Sam was a little more challenging to find the right fit but he is now enjoying his own opportunity to give back to the community. We started Sam Smiles Project in February. Sam collects product and monetary donations to assemble hygiene packs for the homeless. All his packs and proceeds go directly to Mr. Bob's Under the Bridge, a 501c3 organization in Cedarburg. Mr. Bob's distributes about 125 hygiene packs a week to the homeless in Milwaukee and the surrounding area. We started our goal at raising $1,000 and in 12 days Sam accomplished that goal through his Go Fund Me page, which can be found here:  Sam Smiles Project. We keep all of Sam's donors up to date on his Sam Smiles Facebook page which can be found here:  Sam Smiles Facebook.  This project is truly a win/win, Sam gets to work on his skill sets of organizing and assembling the hygiene kits. He also uses his own money at the Dollar Tree store to purchase special additions to his kits, like granola bars, cookies or candy. He restocks his bins and makes deliveries and pick ups. He also practices his writing on his Thank You cards. And Sam is giving back and helping the homeless in Milwaukee.

Sam has become a wee bit of a celebrity with both a write up in our local newspaper and a TV interview!!

March 21, 2018
When Sam Mayer was born, doctors said he would never walk, but he has achieved far more than that and is now helping others with his Sam’s Smiles project ASSEMBLING HYGIENE PACKS for homeless people, 17-year-old Sam Mayer recently worked on his community service project at his father’s company, J&H Heating in Port Washington. Each of the packs bears a sticker with a smile and Sam’s name on it. Photos by Sam Arendt

By
KRISTYN HALBIG ZIEHM
Ozaukee Press staff
When you meet Sam Mayer, it’s hard to ignore his wide smile.
And it’s that grin that has come to define his community service project, Sam’s Smiles.
Sam collects items for the homeless — everything from snacks to deodorant, soap to shampoo, combs to toothbrushes and toothpaste — then organizes them into hygiene packs at his father Jeff’s company, J&H Heating in Port Washington.
He delivers them to Mr. Bob’s Under the Bridge program in Cedarburg, which distributes more than 125 packs to homeless people in Milwaukee every week.
Sam’s Smiles is a dual-purpose charity, not only allowing the 17-year-old Town of Grafton youth the chance to give back to the community but also increase his skill set, his mother Sue said.
That’s important for Sam, who was born with Down syndrome, has a heart defect and respiratory and immune issues and suffered a serious brain injury when he was less than a month old.
“We were told he would never walk, never talk,” his mother said. “We were told he would probably have the cognitive ability of an infant.”
That was news his family didn’t accept. They found an individualized neurodevelopment program that helped Sam surpass those predictions by the time he was 4.
“Within three weeks in the program, he was belly crawling,” his mother said. “That was my green-light moment.”
Sam has also faced a number of physical challenges in his short life, hip problems that forced him to be confined to a wheelchair for a time being among the most recent. He had a full hip replacement when he was 15, and now walks without issues.
“Sam is a warrior, a fighter and through it all he has smiled,” his mother said.
Sam has met his family’s expectations, and currently holds several jobs. He works for J&H Heating part-time, compiling hardware kits for crews to use when installing rooftop units and doing maintenance chores, and he also does contract work for BDS Fastener in Port.
“I’m always asking, ‘What else do you have that he can do?’” his mother said. “It keeps his brain going and keeps it interesting for him.”
From that effort came Sam’s Smiles.
“It’s a project that has taken on a nice flair,” his mother said.
Sam uses some of the money he earns working at his part-time jobs, as well as donations from the community, to buy supplies for the hygiene kits.
His mother recently set up a GoFundMe page to supplement those funds, setting the initial goal at $1,000.
“I think it was 12 days and we hit our goal,” she said, so they’ve upped the goal to $2,000.
While some of his supplies are purchased in bulk through MD Supplies, Sam also goes to the Dollar Store to buy some items, selecting them himself and counting out the money at the checkout counter.
“I want him to learn,” his mother said.
She posts videos of Sam putting together the kits and making deliveries on the Sam’s Smiles Facebook page, and she and her son send thank yous to donors.
“It keeps his mind active and keeps him doing something important, something that means something,” his mother said.
“I’ve always volunteered. I always wanted my children to volunteer. There has to be something you do that’s for others.
“To see him do all these things as independently as he does is fantastic.”
Sam is often supervised by his mother and a representative from Balance Inc. is frequently present with Sam on the job. He takes hug breaks and visits with other workers at J&H.
“He’s been a joy. It’s nice to see him coming to work,” his mother said. “He’s a hard worker.
“I enjoy my time with him. People say it’s a lot. I say it’s easy. I just have to figure how what makes things work for Sam.”
And there are many benefits, she added.
“I have someone who hugs me nine times a day, who tells me he loves me 20 times a day,” his mother said. “Those are our perks.
“It’s good to see him flourish. I’m thrilled with how far he’s come and what he’s able to do.”
Anyone wishing to donate personal sized items for the hygiene kits may drop them off at J&H Heating, 1220 Mineral Springs Dr., in Port Washington’s industrial park. Visit the Sam’s Smiles Facebook page for more information.
Here is the link to his TV appearance with TaTiana Cash from TMJ4: Click here!

I am very proud of everything that Sam has accomplished. He has come so far since his total hip replacement 1 1/2 years ago.

The Sam Smiles Project has raised over $3000 and additional product donations.
Sam has delivered to Mr. Bob's Under the Bridge:
24 sets of long underwear
125 hygiene packs
On Friday he will deliver:
75-100 more hygiene packs
168 pair of warm crew socks
72 long sleeve t-shirts
72 pair of insulated gloves 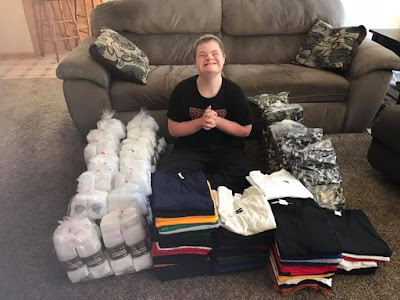 If Sam inspires you please consider making a donation to the Sam Smiles Project. Monetary donations can be made on the Go Fund Me page or mailed to J & H Heating, 1220 Mineral Springs Drive, Port Washington, WI 53074. Product donations can be sent or dropped off at J & H or if you are local Sam & I would be happy to pick up your donation. Thank you for supporting Sam and helping the homeless, God bless you all!

One of life's little blessings!

suelmayer
Wisconsin, United States
I am a freelance writer and a wannabe author that enjoys writing/journaling about my experiences and journey with my children. I love working with special needs children and their families. I believe that sharing experiences, strategies and life lessons enrich all our lives. My degrees are in Marketing and Communication however my skills now are used to research and figure out ways to help each of my children learn and reach their full potential. I also was a general coordinator for Possibility Playground, a unique playground where every child of every ability can play side by side.